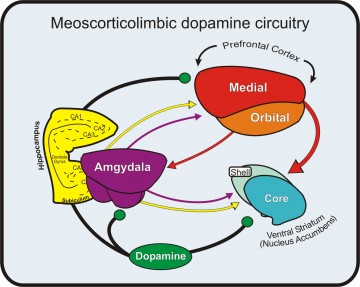 Specific Research Streams
Cortico-Thalamic-Striatal Circuitry and Behavioral Flexibility: The ability to alter behaviour in response to changes in the environment is an essential survival skill that is often impaired in a number of neuropsychiatric disorders. In rodents, this ability can be tested with tasks that require animals to change the way they discriminate between different stimuli that may be associated with reward. This line of research uses both behavioural methodologies and neurophysiological recordings in awake, behaving animals to clarify how different input and output regions of the prefrontal cortex enable animals to behave in a flexible manner. Examples of tasks used include set-shifting and probabilistic reversal learning assays.
Mesocorticolimbic Regulation of Decision Making: These studies investigate the neural basis of different forms of cost/benefit decision making, when animals are given a choice between smaller, easily obtainable rewards, and larger rewards associated with a greater cost, typically conducted in operant chambers. These costs can include making animals work harder or wait longer to receive larger rewards, or by adding some risk to choosing the larger rewards. A key focus is on the contribution of dopamine transmission to these processes, using pharmacological manipulations and in activation of dopamine terminal regions, including the prefrontal cortex, ventral striatum and the amygdala.  Recent work has also employed temporally discrete optogenetic inhibition of brain nuclei interconnected with the dopamine system, to ascertain how phasic activity in this system regulates different aspects of decision making.
Prefrontal GABA Regulation of Cognition and its Relevance to Schizophrenia: Dysfunction of inhibitory GABA transmission within the frontal lobes has been proposed to underlie cognitive and behavioral abnormalities associated with variety of neuropsychiatric disorders, most notably schizophrenia. To better understand this system regulates behavior, these studies investigate how of pharmacological reductions of GABAergic transmission may affect a variety of emotional, mnemonic and cognitive functions known to be disrupted in schizophrenia. Parallel neurophysiological studies probe how these manipulations may interfere with neural activity in downstream regions such as the nucleus accumbens.
Stress and Executive Functioning: Stress-related disorders, such as depression have been associated with impairments in certain aspects of executive functioning.  Studies under this aim are exploring how acute stress may disrupt processes related to cost/benefit decision making and behavioural flexibility and elucidating some of the hormonal and neurochemical mechanisms (i.e.; corticosterone, CRF, monoamines) underlying these effects.
“Reward” circuits mediating aversively-motivated behavior:  Another line of research has been examining how regions connected with the nucleus accumbens mediates different aspect of avoidance behavior and discriminative fear conditioning, and how stress may alter active vs inhibitory avoidance strategies.